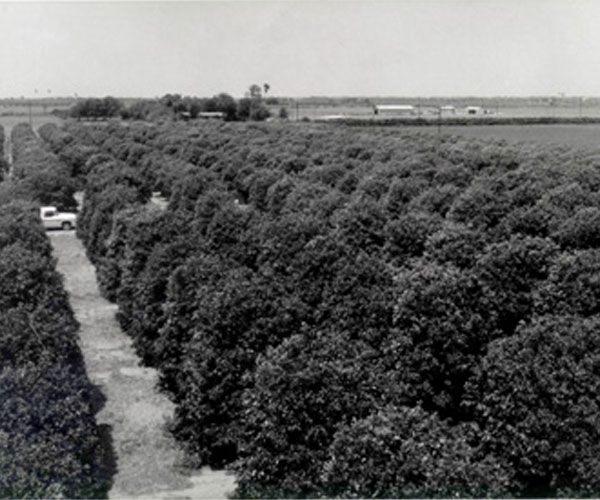 The first reported planting of a grove in Texas was 1893. Initial grapefruit plantings in Texas were the white varieties, followed by pink varieties. A developer originally from Omaha, Nebraska, named John H. Shary and known as “The Father of the Citrus Industry” combined his interest in growing citrus with the latest irrigation techniques and a determination to sell valley citrus commercially. In 1914, he proceeded to grow his first crop of seeded white grapefruit.

The first commercial shipment of citrus – packed in onion crates – left the Lower Rio Grande Valley of South Texas in 1920. It was about the time of the great stock market crash in 1929 when an accidental discovery of red grapefruit growing on a pink grapefruit tree gave rise to the Texas Red Grapefruit Industry. In the late 1920’s and early 1930’s redder bud mutations were found in numerous groves. All the red varieties of fruit started being marketed under the name “Ruby”. The “Ruby” Red Grapefruit was the first grapefruit to be granted a U.S. patent. Following freezes in 1949, 1951, and 1962, Texas eliminated its white and pink varieties, and set out to establish its reputation for growing the red grapefruit.

It was about the time of the great stock market crash in 1929 when an accidental discovery of red grapefruit growing on a pink grapefruit tree gave rise to the Texas Red Grapefruit Industry.

Dr. Richard Hensz of the Texas A&I Citrus Center (now known as the A&M Citrus Center) spent many years in the laboratory, working to produce the reddest grapefruit, and in 1970 the Star Ruby variety was released followed by the Rio Red variety in 1984. To differentiate the Texas sweet, red grapefruit – a superior tasting grapefruit – from those other grapefruit, the industry now markets its fruit under two registered trademarked categories: Ruby-Sweet and Rio Star.

Citrus has a longstanding history in Texas and this is something that we at Lone Star Citrus are incredibly proud of. We believe in honoring the heritage of this great industry and moving into the future with pride in carrying on this great legacy.